How the prize is born

Get to know the prizewinner

How the International alpine Solidarity Silver Plaque was founded

The International Alpine Solidarity Silver Plaque Award  was born in Pinzolo in 1972 from an idea of Cavalier Angiolino Binelli.  From his stubborn determination and intuition to make and develop . this Award; he wanted it  to be a way to remember  the twenty years of the foundation of the first Alpine Rescue Station, of which he was the president,  established in Italy on May 22, 1952  in the Val Rendena town of Pinzolo.   With this initiative, he intended to  give  merit and pay tribute to all those nameless and faceless volunteers who generously spend themselves  often at the risk of their lives, to go  where help is needed.

Since then, the awarding of the prestigious award has become a regular appointment for the Pinzolo community. It is held every year in September, usually on the third Saturday of the month, in the Town Hall, in the council hall of the Municipality, with a suggestive ceremony, very much attended and deeply felt. There are many friends, civil, military and religious authorities, the mountain people, the winners of previous years, Italian and foreign delegations, the people of the country, all united in a warm fraternal embrace.

A special Statute regulates its attribution, with a vision that goes far beyond the scope of those who have dedicated so much of their life to Alpine Rescue, to extend to all those who have distinguished themselves in helping people in difficulty in the mountains, to civilians and soldiers who have worked in risky rescue operations, to alpine guides, to doctors and service managers, firefighters, technicians, even to journalists engaged in witnessing the culture and the correct way of approaching the alpine environment.

The choice of the winner is made by the Executive Committee chaired by Cavalier Angiolino Binelli. The members examine all the reports received (many from our country, but several also from Europe and even from the Americas and Asia), carefully evaluate, with seriousness and in full conscience, the candidacies and the relative curricula, sometimes ask for further information. , and then make the choice. That is always painful, because the deserving ones would be many and the Award goes to only one.

For its high moral and civil significance and the values it promoted, the Award enjoys the High Patronage of the President of the Republic and a special blessing from the Pope.

Several times the Committee had received painful, moving reports of people who had lost their lives during rescue operations. So it was decided to commemorate them too by awarding  a Gold Medal to the Memory to be given to their family members during the ceremony.

On the sidelines of the delivery ceremony, exhibitions, meetings with personalities, theme nights, concerts of alpine choirs and collateral initiatives of various kinds are organized, to which must be added the fixed appointment with the prizewinning by the students of the Comprehensive Institute of Val Rendena for an interesting and instructive moment of comparison and learning.

Year after year the Award has grown, becoming one of the most important and significant events in the Val Rendena, with awards that have crossed national borders to reach the Americas, go to China and reach Siberia….

The Committee of the International Solidarity Award 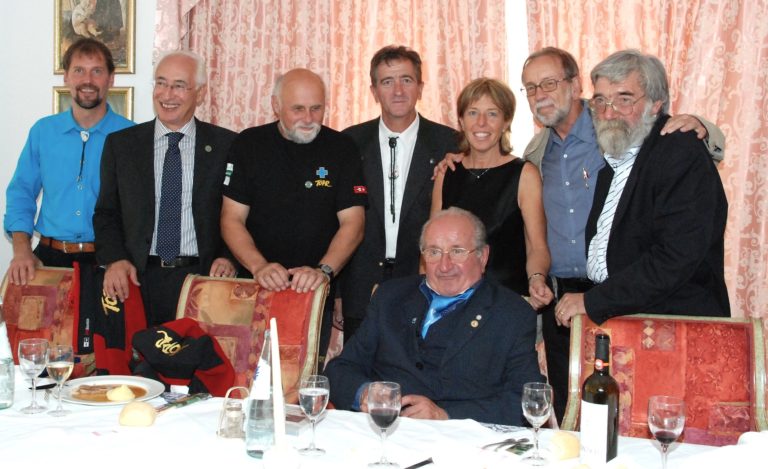 The International Alpine Solidarity Award is made possible thanks to the contribution of: