“To Bruno Detassis – a life for mountain”. This was the written on the plaque given to the popular alpine guide of Brenta. A sentence containing all the meaning of the Pinzolo’s International alpine solidarity prize.As alpinist did several feats, extra-european too, like, for example, on the Andes. But his heart is always stayed on his mountains and, in particular, his Brenta, which he keeps inside. Detassis was awarded not only as rock-climber, famous alpine guide and Brentei refuge’s manager, but also and in particular as alpine rescue’s man, always ready to go where somebody calls.

Born in Trento in 1910, Bruno Detassis started to climb when he was very young. He became famous in 1932 with the direct climb on the Paganella’s South-East face, which inaugurated the series of his great climbs in the Thirties, among which stand out for bravery, elegance and skill the North-East of the Brenta Alta, the North-East of Crozzon di Brenta, the South-West of the North-West peak of Croz Altissimo, the pillar of right of the Cima Tosa’s South-East face and the Canna d’Organo way at the Dain Picol in Sarca Valley. Numerous also the ways opened in Brenta, in the Pale, in Sella and in other places on the Dolomites.

Alpinism instructor by the Aosta’s Alpine military school, in 1943 was deported in Germany, where helped his fellow inmate with his example. In 1949 became the Maria and Alberto refuge’s manager at Brentei. Humble ahead the nature’s power and meticolous for preparing to face it, in 1957-58 led the first expedition from Trento in Patagonia.

One of the main realizers of the Via delle Bocchette, since ever he feels the mountain not as simple stage for daring athletic shows, but as ideal place for a charming existenzial adventure, field of game and together of check for the coherence with his own, with the values which he believes in and the life is worth to live for. 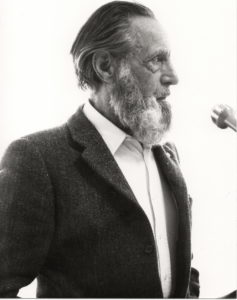 Photos of the 11th edition