Raffael Kostner is one of the most known and highly regarded experts of alpine rescue at a international level of Alto Adige.  For the solidarity and the collaboration ever shown during the mountain rescues he receives this year the Silver plaque as recognition for his service devotion, his seriousness and his constant availability.

To the awareness was also the Senate president, Nicola Mancino, who takes the occasion to give to every organizer committee member a plaque as recognition of the value and the engage worked for promoting the solidarity principle.

Alpine guide and volunteer since 1968, catore in the Catores alpine group since 1974, Raffael Kostner is decorated with the gold medal, which can be honoured only other two persons of.

He makes about 500 rescues between 1968 and 1990. During the following eight years he makes, as windlasser on the helicopter, about 3 thousand rescues facing every conditions of weather and mountains.

In 1986 Kostner organizes a demonstration on the Sassolungo group with 6 helicopters of several types, sure of the alpine rescue can have a future just using the helicopter and having well trained rescuers. Since here leaves the idea of the Aiut Alpin Dolomites, born in 1990 structured in 6 teams, which Kostner is founder and technique director too. The Aiut Alpin Dolomites get in the time an organization in the vanguard for mountain rescue, with to its credit not only operations on the Alto Adige mountains, but also of Trentino and Belluno.

Civil value gold medal to Cesarino Fava, native of Malè (Trento), but resident for many years in Argentina. Fava has made an exceptional rescue giving help to some rope in trouble risking his own safety. 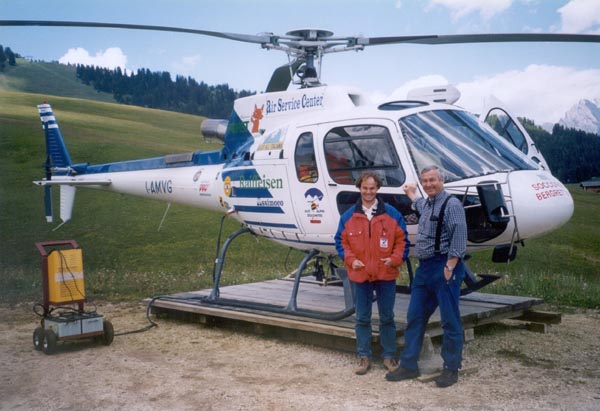 Photos of the 28th edition