This year the International alpine solidarity prize wants to recognize the value and the love for the mountain of a whole nation, the Tibetan one. The prize giving ceremony is brought forward to June for having the possibility to give the important recognition in the hands of the Tibet’s religious and political head, into exile at the present, his Holiness the Dalai Lama, in the name of all his community. In this way is also awarded the father, political and spiritual, of the people living on the “world’s roof”.The Silver plaque gains more solidarity value with the people living on the highest mountain of the world and that, since over 50 years, has not the basic right to his own freedom, identity and culture.

The incomparable scenery of the Dolomites of Brenta is the set for a ceremony which  involves the whole valley. To welcome Tenzin Gyatso, the XIV Dalai Lama, in the main square of Pinzolo, there is a big crowd: all the valley’s majors with the communes’ standards, the volunteers associations, the firemen, the Presanella choir of Pinzolo, the scouts, the primary school children, with their waving coloured drawings, and, of course, the Alpine rescue men.

To his arrived, the Dalai Lama is received with long cheers, while the Pinzolo’s children give him gifts and a little bunch of edelweisses.

“Thanks to everybody – said Tenzin Gyatso after receiving the Alpine solidarity prize from the hands of Angiolino Binelli, oranizer committee president – thanks for waiting for me under this scorching sun, thanks for this important prize, which is not only for me, but which I take in the name of the 6 million of Tibetans. I come from a far country, we have different culture, but we can understand each other just with a smile. Because all the human beings are the same thing and tolerance and mutual liking are the arms for calming down the mind. Everywhere I go, I speak, and I will always do, about love, comprehension and tolerance. You give me this prize, I have nothing to give you but this”.

The 13th of June 2001 Angiolino Binelli, Fabrizia Caola, Pinzolo’s Apt manager, and a little delegation of the organizer committee are gone to Vatican for giving to the Pope a silver and gold plaque in occasion of the 30th anniversary of the manifestation. On the commemorative handmade are represented the Brenta group, the Nardis waterfalls and John Paul II. 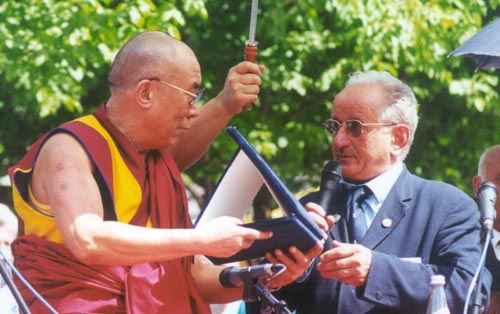 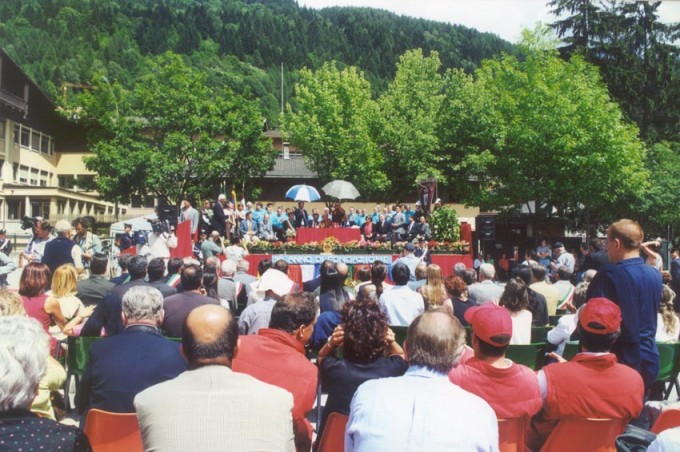